Dongfeng team became the first race team to take delivery of their Volvo Ocean 65 boats after the re-fit process. There are only 250 odd days left to begin the Volvo Ocean Race. 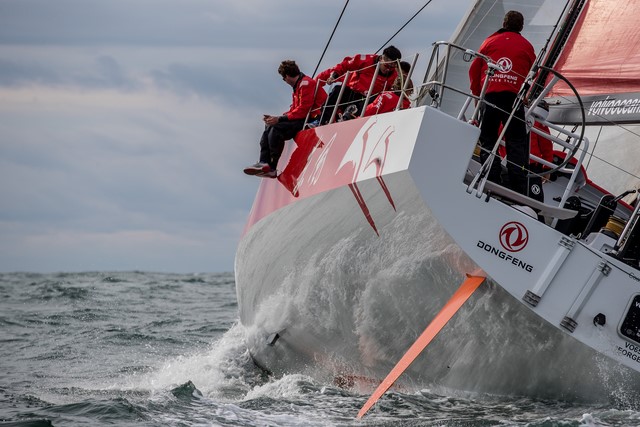 With the delivery of the boat, the formal campaign of the Chinese team started.  The vessel went through one million Euros worth re-fit process which took about 15 weeks. The renewed boat now has a better color scheme, upgraded kits with more than 500 items across sails, electronics, deck gear and new navigation and media station.

The paint and commissioning manager at the boatyard Neil Cox informed that the boat was under sea trial for two days and everything has gone well and it took a mammoth effort from 25-30 people to complete the refitting work.

It took 3,500 man hours by the boatyard team to complete the boat building, electronics, rigging, and sails job and to strip it and to put back in shape.  The painting and branding job took another 2,500 man hours and the result is visible in every part of the boat from the deck, masts, hull, rudders and keel and dagger boards. The boat now has a brand new appearance.

Charles Caudrelier skipper of Dongfeng was trying to build his crew for the campaign so that the team will be able to perform better. Dongfeng team bagged the third place in the 2014-2015 race.

According to the skipper, the team on-board for this year is not finalized, but it is expected to include Western as well as Chinese crew and will also include female sailors according to the new rules. Caudrelier said that they are looking for competitive sailors who are determined to be successful and committed to the race.

Now that the team has received the boat the focus will be on the team’s training and racing program for the Volvo Ocean race, which will start on 22 October from Alicante in Spain.